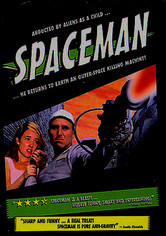 1997 NR 1h 31m DVD
Taken by aliens as a child, Spaceman returns to Earth retooled as an unconquerable and ruthless warrior-drone. Distracted about not being able to fit in, he takes a job as hit man for the Mob, but finds himself unable to get past his outer-space code of honor, which causes him to botch an important hit. He'll have to fight to save himself when he realizes the Mob is now targeting &NFihim&NFi_;!