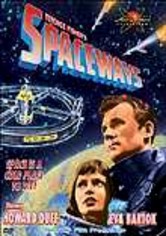 1953 NR 1h 16m DVD
At a covert rocket base in England, Dr. Stephen Mitchell (Howard Duff) is framed for the murder of his wife and her Soviet lover. To clear his name, he ventures into space to retrieve the orbiter used to dispose of their bodies. Dr. Lisa Frank (Eva Bartok) believes her colleague is innocent, and insists on joining his mission. A film noir scenario set in space, Spaceways was the first science fiction film produced by England's Hammer Studios.