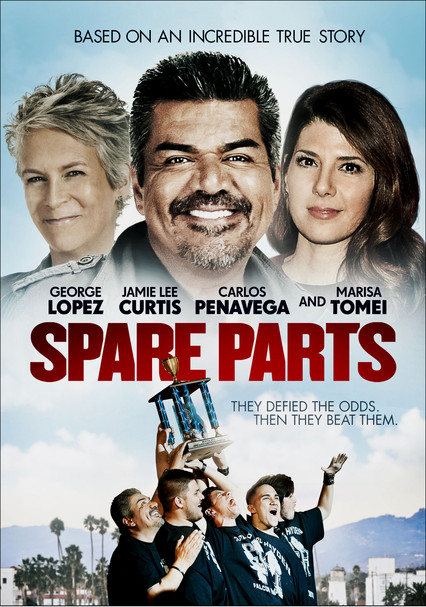 2015 PG-13 1h 55m DVD
The journey of 4 undocumented Mexican-American high school students from Phoenix, AZ who form a robotics club and are led by their teacher with nothing but spare parts and a dream to compete against MIT in a National Underwater Robotics Competition.

Parents need to know that Spare Parts is based on the true story of an underdog high school in Phoenix that entered a robotics competition against M.I.T. and other universities. Like the documentary Underwater Dreams (which tells the same story), the movie explains how the mostly undocumented Mexican-American students managed, against the odds, to excel in a competition that seemingly favored wealthier, more privileged teams. There's some cursing (mostly in Spanish, with words like "hell" in English), a couple of scenes of adults drinking and teens smoking, some kissing, and a few fist fights. But overall the film is a feel-good starting point for discussions with mature tweens and teens about issues related to class, expectations, and immigration.

Kisses between two teens; one shot of Oscar with his shirt off as he changes clothes. Miscellaneous high schoolers kiss in the halls.

A high school boy repeatedly bullies a "nerdy" classmate, stealing his money and lunch, stalking him around school, and punching him. A big guy intervenes on the nerdy friend's behalf and gets in a fist fight with the bully. A big brother pushes his younger brother and a friend around to keep them from robbing a convenience store. Two of the Robotics club guys push and shove and have to be separated before getting into a full fight. References to an accident that killed a man's daughter.

Iffy English words include "hell," "damn," and "stupid." Most of the insults are said in Spanish: "Cabron," for example, literally means "goat," but is a crass insult that roughly translates to "a--hole" or even "f--ker" but can also be used among friends. "Pinche" and "pendejo" are also used pretty frequently.

You don't have to have a lot of money to succeed at a project if you work hard and put your time and effort into it. Even in underprivileged schools, there are bright students who just need a chance to show they can rise to the occasion. Sheds a light on the challenges faced by immigrant and undocumented families.