Spark Among the Ashes 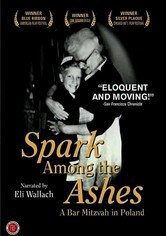 Spark Among the Ashes

1986 NR 0h 53m DVD
In 1985, Connecticut 13-year-old Eric Strom celebrated the first bar mitzvah in Poland since World War II. Oren Rudavsky's award-winning documentary examines the ceremony's impact on Kraków, once the center of European Jewry. As the event draws near, the city, which by 1985 was home to only 200 Jews, walks a line between the traditions of the past and hope for the future. And for many, Strom becomes a symbol of renewal of Jewish life in Poland.