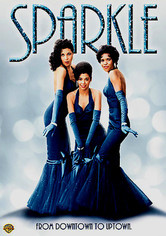 1976 PG 1h 38m DVD
When three singing sisters from Harlem hit the big time, they end up losing one another in this musical melodrama set in the 1950s. While the oldest sister (Lonette McKee) falls victim to drugs and a gangster lover, the youngest (Irene Cara) becomes a superstar -- though not before overcoming all sorts of obstacles. Curtis Mayfield provides a great set of songs, and McKee sings them with style and power in this Supremes-inspired story.

Parents need to know that Sparkle is the 1976 movie with Irene Cara, not the remake with Whitney Houston. It doesn't gloss over the many potential obstacles on the road to fame: There are drug dealers, mobsters, and abusive boyfriends, all of whom might derail a talented singer's dreams, and the film shows all of their unsavory behavior. There's some drug use (including cocaine), plenty of smoking, and a good amount of drinking in bars and at dinner parties. There are also some brutal domestic-abuse scenes and occasional swearing (including the "N" word).

Couples kiss and make out on-screen and sometimes are shown relaxing in bed semi-clothed.

A drug kingpin regularly beats his girlfriend, who often appears with bruises on her face. Two men get into a brutal street brawl. Police officers fire shots at a fleeing suspect during a drug bust. Gangsters threaten a man with a gun at close range.

Occasional swearing and racial slurs, including "s--t" and the "N" word. Though the words aren't heard often, they stand out.

The movie's message is that staying focused on a goal and not allowing yourself to be sidetracked by negative influences is how you achieve success.

Many of the singing scenes feature performances in nightclubs, where people smoke and drink. Several characters smoke cigarettes and cigars regularly. One of the three main characters dates a drug kingpin and sometimes snorts cocaine. Later she gets involved in other drugs.