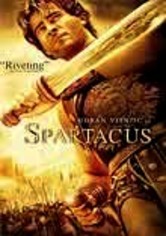 2004 NR 2 discs
Goran Visnjic stars as the titular gladiator in this TV miniseries that's adapted from the same 1951 Howard Fast novel that spawned Stanley Kubrick's 1960 film classic. Living as a slave in Egypt, Spartacus is bought by gladiator trainer Lentulas Agrippa (Alan Bates, in his final screen role), and forced to fight for the amusement of the Roman masses. But he soon spearheads a slave uprising that rocks the very foundations of Rome.