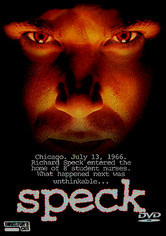 2002 R 1h 14m DVD
After conning his way into the dorm of several female college students, madman Richard Speck (Doug Cole) proceeds to tie up the girls and perform horrific crimes. In one brutal night, Speck tortures, rapes and murders eight innocent nursing students. Directed by Keith Walley and based on an actual event that happened in Chicago on the night of July 14, 1966, this movie depicts Speck's shocking, gruesome and despicable acts, as well as their aftermath.