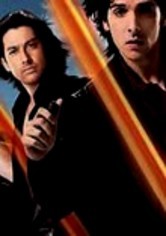 2007 NR 1h 44m DVD
In this Bollywood thriller, a young man (Zayed Khan) arriving in London to persuade his ex-girlfriend (Tanushree Dutta) to get back together suddenly receives a mysterious phone call from a female stranger (Urmila Matondkar): She has been kidnapped and begs for his help. Meanwhile, the woman's husband (Sanjay Suri), an undercover MI5 agent, is being used as a pawn in a plot to assassinate the Indian prime minister, who is traveling in London.