Spenser: For Hire: The Judas Goat 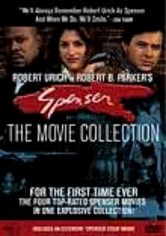 Spenser: For Hire: The Judas Goat

1994 NR 1h 31m DVD
An out-of-town gig may prove too much for private investigator Spenser (Robert Urich) and his right-hand man, Hawk (Avery Brooks), when a terrorist group with a taste for car bombs targets the family of a controversial African leader (Leon Pownall). This 1994 made-for-television movie brings many of the beloved characters from the 1980s drama series (based on the books by Robert B. Parker) back to the small screen.