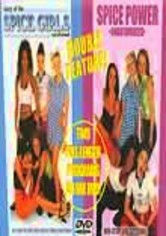 2004 NR 1h 22m DVD
Posh, Sporty, Scary, Baby and Ginger Spice burst on the music scene in 1997. Now, you can take a backstage look at the British pop phenomenon known as the Spice Girls with this "unauthorized" DVD. Follow their career from the very beginning, starting with their 1994 audition video and the trials and tribulations that led to their meteoric rise to international fame with their self-titled debut album that included the smash hit "Wannabe."