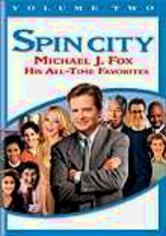 1996 TV-PG 2 discs
If you thought the laughs were over for Spin City, think again! Michael J. Fox handpicks more of the funniest episodes from the hit TV sitcom, in which he stars as Deputy New York City Mayor Mike Flaherty. The rest of the cast, including Heather Locklear, Richard Kind and mayor Barry Bostwick clearly enjoy their time on the show, and Fox introduces each hilarious episode himself.