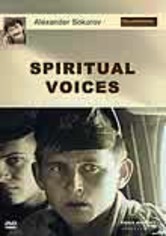 1994 NR 2 discs
In 1994, filmmaker Alexander Sokurov accompanied a Soviet army platoon assigned to a military post at the Tajikistan-Afghanistan perimeter. Although Russia withdrew from its war with Afghanistan in 1989, an elusive foe still engaged the Soviets in scuffles there. Sokurov's evocative and intricate documentary series effectively chronicles the hostile setting and the isolation and sense of futility plaguing the homesick soldiers.