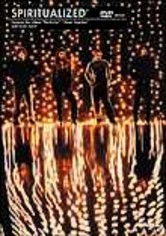 1997 NR DVD
With the decadently dreamy 1997 smash "Ladies and Gentlemen, We Are Floating in Space," inventive British trio Spiritualized beat out acts such as Radiohead for the "New Musical Express" album of the year. This release packages videos for the breakout singles "Electricity" and "Come Together" with brief documentary footage that follows the band through live performances at Glastonbury and London's Royal Albert Hall.