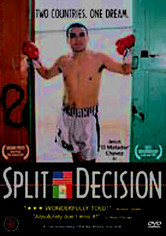 2000 NR 0h 58m DVD
Jesus "El Matador" Chavez was a gifted boxer poised to become a force to be reckoned with in the American boxing world. That is, before a prior criminal conviction forced his deportation to his native Mexico. As Jesus struggles to return to his former life in America, he must come to terms with the country of his birth. Documentarian Marcy Garriott's film presents a complex character study of a true victim of circumstance.