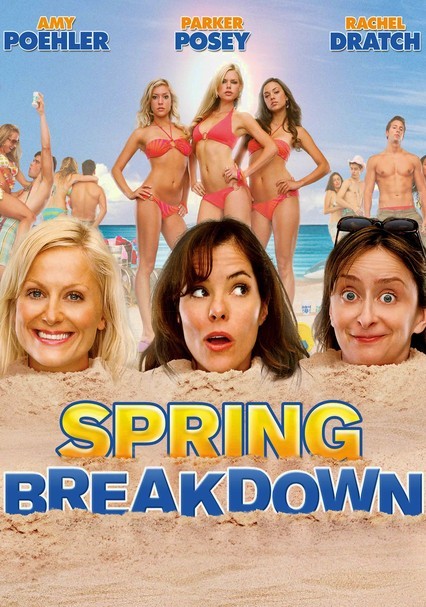 2007 R 1h 24m Blu-ray / DVD
Desperate to spice up their boring lives, three thirtysomething women (Amy Poehler, Rachel Dratch and Parker Posey) set off for a vacation on a tropical island known for its raucous Spring Break parties. But instead of recapturing their youth, they wind up mothering a senator's shy daughter (Amber Tamblyn). As they help the awkward girl grow more comfortable in her own skin, they, too, learn to embrace aging with wit, joy and grace.

Parents need to know that this is a comedy that takes the concept of spring break to its most outrageous levels. While there is no actual nudity, college-aged girls wear bikinis, tight shorts, thongs, etc. and little else throughout the film. The dialogue is filled with references to body parts, coarse swearing, and crude language, all delivered to get laughs. Sexual episodes include: lots of sexy dancing, passionate kissing, girls kissing, a "threesome," and a glimpse of a gay massage. Kids, having no adult supervision, spend a week dancing, drinking, getting drunk, and letting their libidos run wild. Even the semi-sensible adults, of which there are only a few, get caught up in the rowdy, self-indulgent, never-ending party.

Slapstick roughhousing, including salsa wrestling, girls fighting clumsily, a character hit with a football, a whack in the face, a false threat with a "loaded gun," and a dead cat seen from a short distance.

Young women are shown to be two-faced, cliquish, and cruel, while some, with less self-confidence, are willing to do anything to be accepted into the group.Â Most suffer no remorse, nor are there consequences for bad behavior. Homosexuality is seen only as a stereotype. A blind man is the brunt of a recurring joke. Everything, however, is depicted as over-the-top, ridiculous behavior not meant to be imitated or taken seriously.