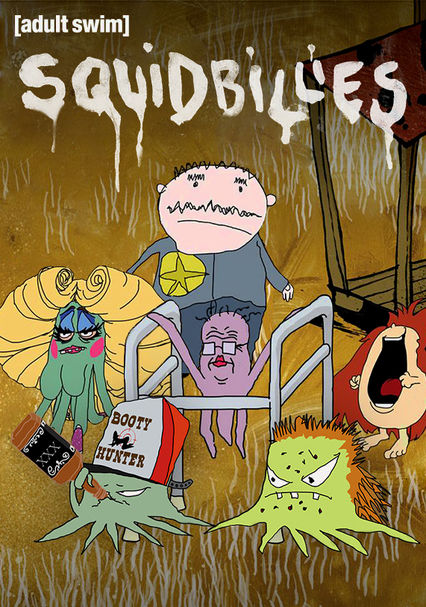 2005 TV-MA 3 seasons
The Cuylers are a down-on-their-luck hillbilly family living in rural Georgia. They also happen to be squids. This dark animated comedy follows the aquatic clan as they negotiate life with little money and no bones.

It's down-home drama, squid-style, in this irreverent animated series. The second volume of episodes from Season 3 finds the Cuylers hunting a rare bird, discovering the perils of going green and watching their beloved home burn to the ground.

Deep in the mountains of northern Georgia, the gun-toting, trucker hat-wearing Cuyler clan, descendants of the Appalachian Mud Squid, engage in backwoods romance, moonshinin' and other redneckery.

Parents need to know that this mature cartoon (part of the Adult Swim line-up on Cartoon Network) is so riddled with violence, sexual references, and disturbing dialogue that it's easy to miss what little inane plot actually exists. Human characters often meet untimely demises, from being constricted by a snake man to the point of decapitation to being burned by an intentionally combustible baby's soothing toy. The main characters are inbred squid who are appallingly stereotyped as hillbilly inhabitants of the southern United States. This show is completely inappropriate for kids.

Characters shoot, stab, and maim others. One body is mutilated with a chainsaw, another character is mauled repeatedly by wolves, and some relationships (including the main one between a father and a son) are physically and emotionally abusive. The local businessman markets various products for infanticide.

The show takes stereotyping to the extreme, greatly exaggerating what's often associated with rural southern life. The main characters are violent toward friends and family members. Attitudes toward and portrayals of women are extremely derogatory.

Smoking and drinking is commonplace throughout the show. Drug use is alluded to from time to time.