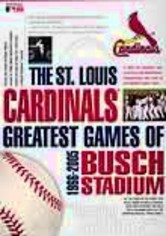 1968 NR 6 discs
On May 12, 1966, the gates to Busch Stadium in St. Louis swung open for the first time, and millions of fans have cheered on their beloved redbirds ever since. This keepsake collection contains complete broadcasts of six of the most unforgettable games played in the landmark arena, including key World Series showdowns in 1968, 1982 and 1987. Among the other highlights is slugger Mark McGwire's record-breaking 62nd home run.