St. Michael Had a Rooster 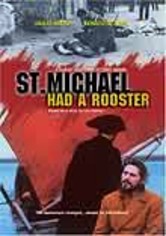 St. Michael Had a Rooster

1972 NR 1h 27m DVD
Imprisoned for his crimes, Giulio Manieri (Giulio Brogi), the passionate leader of a radical anarchist movement in 19th century Italy, remains steadfastly committed to his political principles during a decade of solitary confinement. But Giulio is forced to question his beliefs when he's transferred to a group prison where he discovers the next generation of dissidents has traded in revolutionary extremism for a more pragmatic approach.