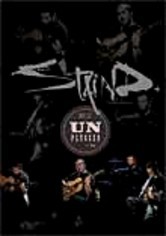 2001 NR 1h 0m DVD
Alt-rockers Staind perform some their biggest hits in this 2001 volume of the MTV concert series. Acoustic versions of their songs combine with the intimate setting to add new dimensions to Staind's haunting melodies and lyrics. Tracks include "It's Been Awhile," "Pressure," "Home," "Excess Baggage" and "Mudshovel." Also featured are four music videos, interviews with the band and behind-the-scenes footage.