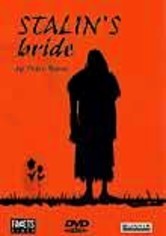 1991 NR 1h 29m DVD
Acclaimed Hungarian filmmaker Peter Basco directs this savvy political farce, set in the summer of 1937 during the darkest days of Joseph Stalin's reign. When the pitifully dressed Parana (Juli Basti) wanders into a remote Soviet village, the suffering townsfolk angrily dub her "Stalin's Bride." With eyebrows raised by Parana's new nickname, the authorities cart her away, eventually allowing her to return to face her cruel tormentors.