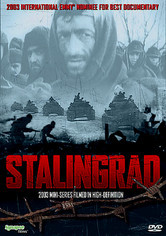 2003 NR 2h 45m DVD
The long and bloody battle that marked the beginning of the end for Nazi Germany is the subject of this Emmy-nominated World War II documentary. Filmmakers Sebastian Dehnhardt, Christian Deick and Jorg Mullner make extensive use of soldier-shot footage to show the conflict from both Russian and German perspectives, and employ eyewitness accounts, archive film and 3-D animation to reconstruct the city and plot the course of its destruction.