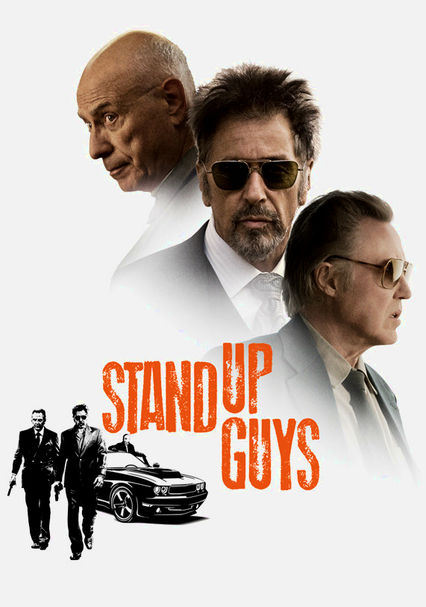 2012 R 1h 35m Blu-ray / DVD
This tough-guy comedy follows the rambunctious reunion between three retired gangsters and their reminiscences of wild times and crimes gone by. Energized by their own memories, the drunken friends unwisely undertake a reckless criminal adventure.

Parents need to know that Stand Up Guys is a crime comedy starring Christopher Walken, Al Pacino, Alan Arkin as three septuagenarian criminals who are reunited over one long night. Questions of loyalty and consequences come up from time to time, though the movie doesn't explore these themes very deeply. Violence is an issue, with a fair amount of fighting, punching, shooting, and blood. There's also sexual content: Characters take Viagra and have sex with prostitutes (off screen), one character sleeps with two women at once (also off screen), and a woman is found naked in a trunk, though no sensitive body parts are shown. Language is strong, with multiple uses of "s--t," "f--k," and more. Characters drink plenty of alcohol and smoke cigarettes over the course of their long night, and they have a supply of prescription pills. (One character breaks open the capsules and experiments with snorting them.) Teens may not be interested in this story of older guys, but those who are need to be mature enough to handle the content.

The main characters visit a brothel. One takes extra amounts of Viagra (only referred to as "boner pills") and sleeps with a prostitute off screen. A second character sleeps with two women at once, a prostitute and the woman at the front desk, both off screen (and without Viagra). A naked woman is found in a car trunk, but she's filmed curled up so that nothing is shown. Also very strong innuendo throughout, such as when a main character tries to pick up three women in a bar.

The violence doesn't really pick up until about halfway through the movie, after that there's plenty of it, including punching and fighting, shooting, and blood. A man is smashed in the crotch, and the movie climaxes with a bullet-ridden shootout. A main character dies. There are also heavy threats and suggestions of violence in the dialogue. A doctor plunges a hypodermic needle into a character's penis (off screen) after that character takes too much Viagra.

Much of the movie relies on iffy behavior with few consequences, but one character must decide between committing murder to protect his own safety and protecting his best friend instead; he chooses loyalty and friendship. The movie also deals with the idea of "consequences" for some bullies who've mistreated a woman, though it translates into simple revenge.

Viagra plays a big role in the movie, though it's not mentioned by name specifically.

Characters stay up all night and drink a lot of alcohol. They also break into a pharmacy and steal several bottles of prescription pills (mostly for things like cataracts and hypertension). One character breaks open some of these pills and snorts them. A main character is seen smoking cigarettes on more than one occasion.