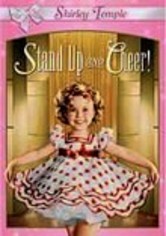 1934 PG 1h 8m DVD
In an effort to perk up a despondent nation in the throes of the Great Depression, the president of the United States creates a new seat on his cabinet and names a hotshot Broadway producer (Warner Baxter) "Secretary of Amusement." A 6-year-old Shirley Temple delivers a star-making rendition of "Baby Take a Bow" -- a song that spawned a hit film of the same name later that year -- in this classic musical comedy.