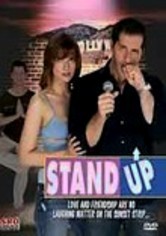 2007 NR 1h 41m DVD
Avi's grandmother wants him to stay in New York and settle down. But his heart is in Los Angeles, where success as a stand-up comedian beckons. Avi soon discovers that Tinseltown changes everything -- and everyone -- and not always for the better! Modi Rosenfeld, named one of New York's top 10 comedians by &NFiThe Hollywood Reporter&NFi_; stars in this hilarious look at fame, fortune and the strange world that is the West Coast.