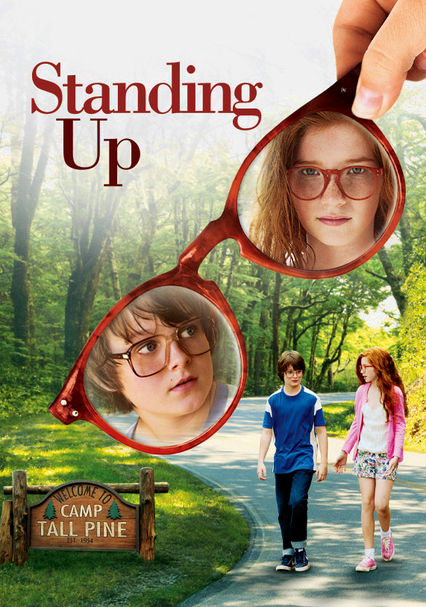 2013 PG 1h 30m DVD
A boy and a girl who are ostracized by their peer groups at summer camp decide to run away together after becoming victims of a vicious prank. They soon develop a bond, helping each other overcome adversity and start down the path of self-discovery.

Parents need to know that Standing Up takes a hard, earnest look at an act of cruel bullying, its aftermath, and profound effect on two vulnerable kids, ages 11 and 12. Based on The Goats, by Brock Cole, a popular and highly recommended book for kids 10-14, the film contains some scenes and situations that may be disturbing for very young or tender viewers. In addition to an initial prank where the kids are abandoned naked in the woods, the girl is later intimidated by the clumsy sexual advances of a teen bully. Also the two kids find themselves threatened by a seedy deputy sheriff, and a young boy reveals himself to be the victim of physical abuse by a parent. Still, the movie is an ideal starting point for important discussions about rejection, self-worth, empathy, and, above all, standing up for oneself.

Some teens on a beach wear skimpy bikinis. A summer camp party shows kids slow dancing/embracing; one boy makes unwanted advances toward a 12-year-old girl, trying to kiss her and push himself on her.

In the suspenseful opening scene, young bullies prank two terrified campers by holding them against their will and leaving them both naked in the woods. Much later at a dance, the boy rescues the girl who is being sexually harassed by another teen bully. The two kids make a frantic getaway from a sleazy deputy sheriff who appears to mean them harm; there's a chase, a scary car ride, and cliffside danger.

Told from the point of view of tweens who have been bullied, the film emphasizes efforts to regain self-confidence through positive action, to find solace in friendship, and to use even the most hurtful event as a source for growth, learning, and empathy towards others.

An adult smokes a cigarette and appears intoxicated.