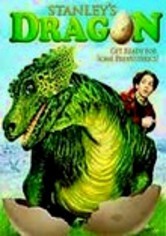 1994 G 1h 32m DVD
While exploring a cave with friends, American exchange student Stanley Katz (Judd Trichter) is surprised to discover an unusually large egg. He's even more surprised when the egg hatches and a dragon emerges. Thus kicks off a whimsical friendship between Stanley and his new fire-breathing pet. But the whimsy may be short-lived if Stanley can't keep his friend out of the hands of the authorities who intend to lock him up in the zoo.