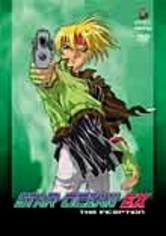 2001 NR 5 discs
This anime sci-fi adventure series follows a father-and-son team involved in an operation to explore uncharted territory on the planet Mirokinia. But things get turned upside down when Claude inexplicably turns up on the planet Expel, instead. While he tries to figure out just where he is and how he got there, he saves a girl from danger, and she later tells him he's a celebrated warrior. Just what is Claude's destiny in this strange new world?