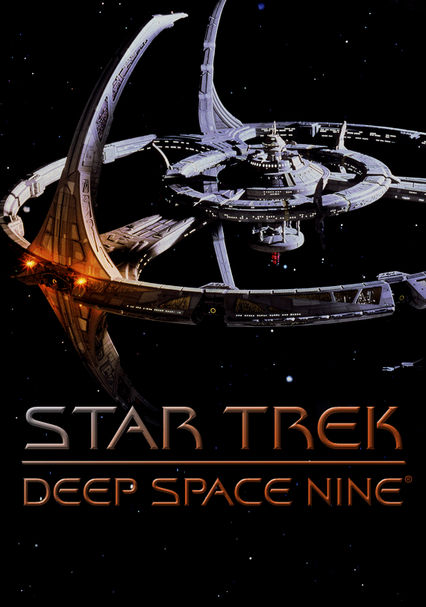 1993 TV-PG 4 seasons
This installment of the Star Trek canon centers around the crew of the space station Deep Space Nine, formerly an outpost of the evil Cardassians that has been placed under the control of the Federation and commanding officer Benjamin Sisko (Avery Brooks). In contrast to the exploration themes of other Star Trek series, "Deep Space Nine" focuses more on character conflict, interstellar politics and war. Nana Visitor and Rene Auberjonois co-star.

Commander Benjamin Sisko (Avery Brooks) heads the crew of Deep Space Nine -- including Odo (Rene Auberjonois), Worf (Michael Dom), Dax (Terry Farrell) and others -- as it travels through space, trying to keep both the ship and the areas it travels safe, secure and free. One of the first (and greatest) challenges the intrepid voyagers face is the violence of the Dominion, a group composed partially of the shape-shifting Changelings.

Located at the mouth of the outer space "wormhole" that allows travel from Alpha Quadrant to the Gamma Quandrant -- where the cruel and vindictive Dominion reigns supreme -- DS9 is well-positioned for adventures of all kinds. Avery Brooks stars as Bejamin Sisko, head of the space station Deep Space Nine. Catch all the exciting Season 3 episodes to see whether the Federation can protect its mission.

The mixed Deep Space Nine crew of Federation and Bajoran officers winds up the seventh and final season of the show with suspenseful episodes that try to pull together all the plot threads (or at least the biggest ones). Avery Brooks returns as Capt. Benjamin Sisko, along with René Auberjonois as Odo, Michael Dorn as Lt. Worf, Colm Meaney as Chief O'Brien, Armin Shimerman as Quark and Nana Visitor as Maj. Kira.

Parents need to know that this Star Trek: Deep Space Nine is by far the most violent entry in the franchise. One alien race was enslaved and forced into concentration camps, while another has been genetically engineered to become the perfect fighting machine (their masters take over a portion of the galaxy and prove to be brutal dictators). A secret faction within the Federation engages in biological warfare. Later seasons focus on an all-out war against the Dominion, which costs billions of lives and features several battle scenes involving hundreds of starships. There are more sexual situations and innuendos than in other Star Trek series, but there's never any nudity, and language is not an issue.

No nudity, but more sexual situations and innuendo than other Star Trek series. Couples occasionally shown in bed together, etc.

Explores themes of genocide, fascism, and oppression, all of which come with plenty of violence -- though it's discussed more often than it's shown. A central long-running plot line involves a major intergalactic war, with plenty of spaceship battles and some ground combat.

The Federation is portrayed as a benevolent democracy with a tolerance and acceptance for other cultures. However the series also features several other cultures with very different values, including the Klingons, who judge each other by their fighting prowess; the sexist Ferengi; and the Dominion, a fascist dictatorship bent on taking over the galaxy.

No direct product promotion, but the Star Trek franchise is a commodity in itself.

One of the main characters owns a bar where many important scenes take place, usually with a fair amount of drinking. An entire race of villains has been genetically engineered to be addicted to a drug.