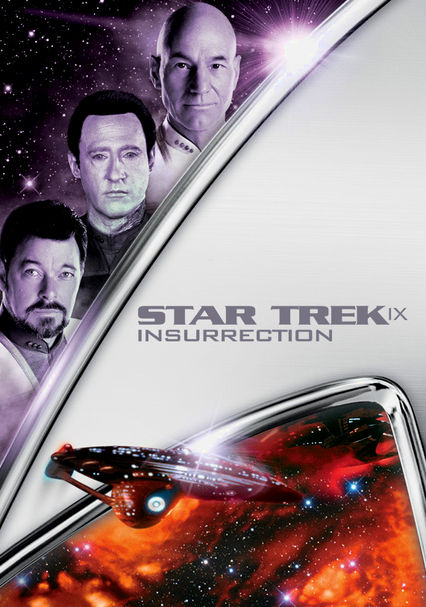 1998 PG 1h 43m DVD
Capt. Picard and the Enterprise crew head to a mysterious world where metaphasic radiation has halted the aging process of its citizens. There, they work to unravel a conspiracy that would harness the planet's power.

Parents need to know that two longtime characters in the Next Generation cast plunge into a playful sexual relationship under the aphrodisiac influence of an alien environment, and they cuddle in a hot tub with alcoholic beverages (by the next movie, Star Trek: Nemesis, they are married). No explicit sensuality or nudity, though. Ray-gun space battles, explosions, and perils include combatants taking fatal falls, and children and families fleeing from an ariel attack -- though rather than being killed the victims are beamed into captivity, making it more like "tag." There is some barely-PG-worthy profanity, and the villains are ugly aliens who undergo frequent plastic surgery. One uses a sort of facelift machine to kill a character.

Mostly flirty talk, as two longtime series characters, a former couple (as every fan knows) suddenly rekindle their sexual relationship, and are shown intimate (demurely) in a hot tub together.

Starfleet is notably racially, gender, and species-integrated (with the addition of Mr. Data, even machine-integrated), and there is a strong sense of friendship and loyalty. Customary themes of military-style unfailing duty to Starfleet are replaced with the Enterprise crew rebelling when they sense injustice being committed.

Star Trek itself is a space armada of products, toys, video games -- even a Las Vegas attraction.

Drinking between an amorous couple. Brief mention of an addictive space narcotic that was a major plot point in one of the Star Trek TV shows.