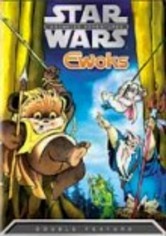 2004 NR 2h 54m DVD
Join young Wicket the Ewok as he protects the village of Bright Tree in this animated double feature, in which Wicket and his friends learn life's important lessons deep within the forest moon's magical woods. In two separate adventures, when trouble rears its head in the form of Morag the Tulga Witch and the Ewoks' rivals the Duloks, Wicket and his pals band together to help the grown-ups defend the village.