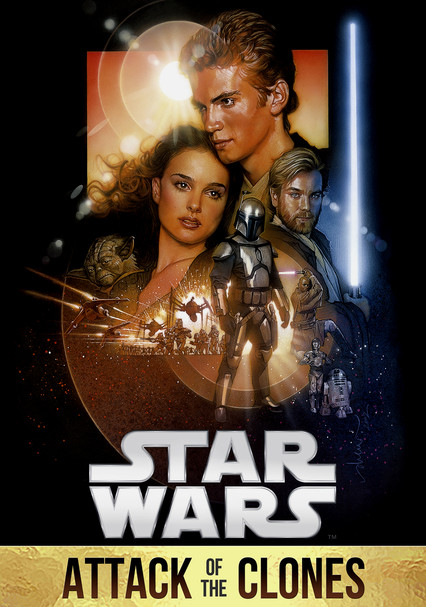 2002 PG 2h 22m Blu-ray / DVD
George Lucas's famous saga about a galaxy far, far away continues as Anakin Skywalker (Hayden Christensen) makes progress in his Jedi training, falls in love with Padmé Amidala (Natalie Portman) and grows into a young man capable of a power that can either save or destroy him. Though he's under the direction of Obi-Wan Kenobi (Ewan McGregor), Skywalker wrestles with the demons that begin to lure him to the Dark Side.

Parents need to know that Attack of the Clones is the second prequel in the epic Star Wars saga; it isn't the most intense of the series, but there are still moments of striking violence (including a beheading and an amputation) and a few very emotional moments. The death of a major character's mother on screen is a particularly dark and disturbing sequence that may upset children. Kids able to handle the stronger moments will especially enjoy several exciting and imaginative sequences, from a white-knuckle chase in a flying car to battles against surreal space monsters. One of the film's central plotlines is a blossoming romance between two of the lead characters. Though their interactions are relatively tame, there's some mild flirting and a few substantial kisses.

One of the film's central plotlines is a blossoming romance between two of the lead characters. Though their interactions are relatively tame, there's some mild flirting and a few substantial kisses.

Heavy sci-fi violence, although none of it is especially gory or detailed. The film opens with a terrorist attack/explosion in which a minor character dies on screen. One character is killed by beheading (no gore) on screen; another has his hand amputated during a sword duel. There are action sequences throughout, but the major violence takes place in the film's finale, a massive battle between human clones and robot drones that's depicted both in close-up vignettes and widescreen shots of many skirmishes at once. Perhaps the most intense sequence involves a lead character becoming consumed by rage and murdering the alien creatures who killed his mother.

Occasional use of both "damn" and "hell" by main characters. Less insult-laden banter between characters than in any of the other films in the series.

The line between good and evil is clearly drawn; heroic characters demonstrate positive behavior traits, although one character is unable to choose the greater good over his own personal desires.

The film takes place "a long time ago, in a galaxy far, far away," so there are no real-world product placements. But this franchise is perhaps one of the most heavily merchandised in the history of film, with action figures, kids' clothing and accessories, and every other type of product available.