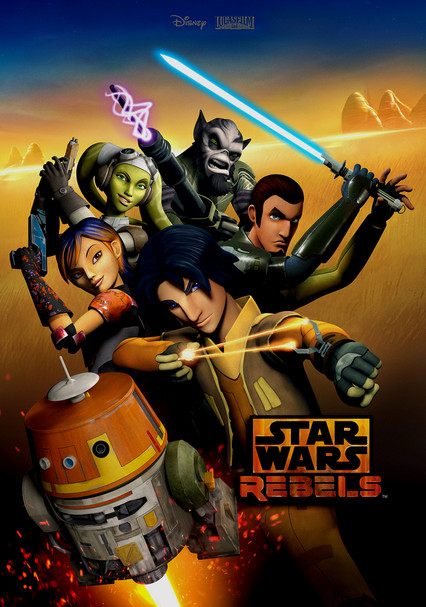 2014 NR 4 seasons
Star Wars Rebels continues the epic tradition of the legendary Star Wars saga with exciting action-packed episodes. It is a dark time in the galaxy as the evil Galactic Empire rules with an iron fist.

A spark of rebellion ignites in Star Wars Rebels: Complete Season One! Imperial forces have occupied a remote planet, ruining the lives of its people. A ragtag band of rebels — Ezra, Hera, Kanan, Sabine, Zeb and Chopper — have taken a brave stand against the ruthless oppression of the Empire in a fight to restore peace and freedom to the galaxy.

In the second season of Star Wars Rebels!, Ezra continues his journey to become a Jedi under Kanan's guidance, the crew of the Ghost bands together with a secret rebel cell and ex soldiers from the Clone Wars to join a fledgling alliance to restore peace and freedom to the galaxy. But the dark side looms large as Darth Vader dispatches new Inquisitors, setting the stage for a climactic showdown in which terrible truths will be revealed and the lives of our heroes will be changed forever.

Join the GHOST crew as it prepares for its biggest mission yet in STAR WARS REBELS: SEASON THREE! The story of the GHOST crew is far from over. While Sabine confronts new challenges on her home world of Mandalore, Ezra's growing power as both a Jedi and a rebel leader helps the rebellion acquire new resources and recruits for the fight ahead. However, the Imperial effort to eliminate the rebellion is now being led by the coldly analytical Grand Admiral Thrawn, whose strategic, tactical and cultural insights make him a threat unlike any they have faced before.

In the show's final season, Hera leads a valiant assault on Thrawn's forces, the Ghost crew infiltrates Imperial headquarters to rescue one of their own, and Ezra discovers the Empire's sinister plans for the Jedi temple.