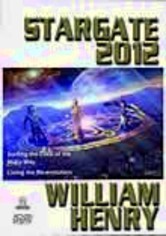 2005 NR 2 discs
In this fascinating two-part program, investigative mythologist and author William Henry explains the little-known concept of Stargate, a technology some believe was created by an ancient alien civilization before it was lost thousands of years ago. According to Mayan prophecy, the technology will resurface sometime before the year 2012, ushering in a new age of thought -- and a new type of human being.