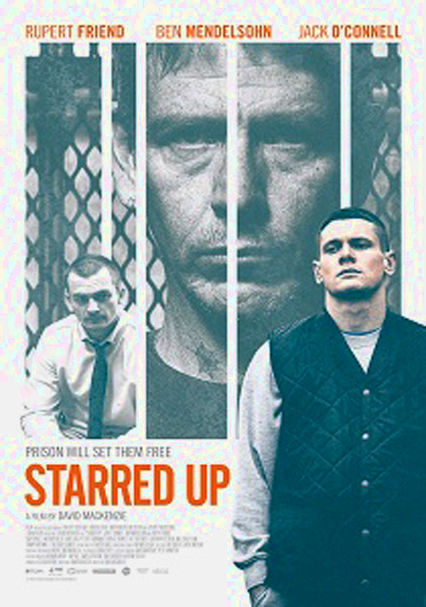 2014 NR 1h 40m DVD
In this gritty drama, Jack O'Connell gives a standout performance as a teenage offender whose violent temper gets him moved to an adult prison, where he finds a different breed of inmate -- including his long-incarcerated father.

Parents need to know that Starred Up is a well-made British prison drama about a troubled teen who becomes old enough to enter the adult prison system (the title is a slang term for that transition). The movie is extremely hard and unflinchingly realistic, with matter-of-fact violence and full-frontal male nudity. Characters fight fairly frequently, and sometimes the fights come to blows, with blood shown. In one fight, a character bites down on a man's crotch and stays there until the fight is over. Language is extremely strong and constant, including multiple uses of "f--k" and "c--t." One prisoner retrieves a cell phone from his rear end (nothing graphic shown on screen), and the main character must have his own rear end inspected for contraband before entering the prison. Prisoners are shown smoking cigarettes, and some clandestine drug dealing appears to be happening, but it's not a major plot point.

The main character is shown full-frontally naked on more than one occasion, though it's generally not sexual in nature. When he first arrives in prison, he's asked to strip, and an officer must inspect his bottom for smuggled items. (This happens off screen.) In another scene, he gets into a fight while naked in the shower. A prisoner removes a cell phone from his anus (he does this while sitting on a toilet, and the act is mostly out of view). A secondary character kisses his cellmate. Some strong sexual innuendo during one of the therapy sessions.

The main character has raging outbursts of uncontrolled violence. In one scene, he beats a man unconscious, with blood shown. Cops in riot gear go after him, and he proceeds to fight them as well. In another scene, several guards gang up on him, and he stops the fight by biting a man's crotch and staying there until the others back away. The main character tells a story about how he killed a "pedo" (pedophile). The main character creates a weapon from a toothbrush and a razor and attempts to kill a man with it. Prisoners try to hang the main character in his cell. Various amounts of blood are shown throughout.

The movie shows two ways of looking at an angry, lost youth. Some of the authorities see the need to treat him without mercy and with strong discipline. But a therapist feels that sympathy and listening could help. In this movie, nothing is that simple, and the problem isn't solved, but it appears that at least the main character has more of a chance than he once did. Also, a father learns to make a sacrifice for his teen son.

One prisoner is shown wearing an Adidas running jacket.

Some of the prisoners smoke cigarettes. Some also appear to be dealing drugs, but this is shown in an offhand, background way.