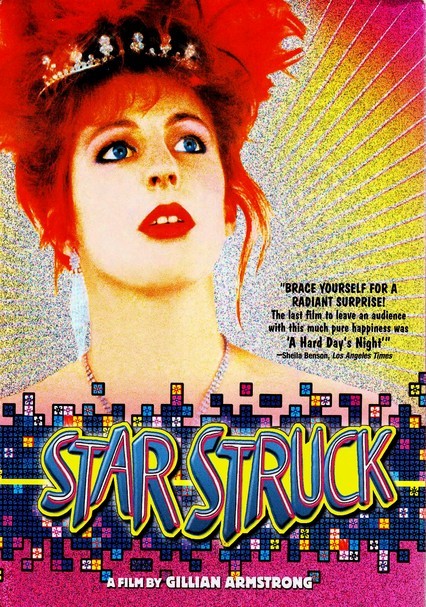 1982 PG 1h 35m DVD
Jackie Mullins (Jo Kennedy, doing her own new wave singing) is an aspiring star who just has to sing. And with her cousin Angus on her side, stardom might not be too far off. The two team up with a local band, The Wombats, to take their big shot at fame, fortune and celebrity -- all the while trying to save the family pub. Gillian Armstrong directs this quirky movie filled with 1980s hairdos and kangaroo costumes.

Parents need to know that the main issue in Starstruck -- a pop-musical from the early 1980s featuring energetic song-and-dance numbers -- is drinking and smoking. The main character's family runs a pub, so lots of scenes are set around people drinking and smoking and a 14-year-old boy regularly lights up. Expect a bit of swearing (including "s--t") and some brief nudity while a couple is relaxing in bed together.

A few kisses, some moderate flirting, and a few dances with suggestive movements. A couple relaxes in bed, with brief glimpses of her breast and his butt. A woman stages a publicity stunt where she walks across a tightrope in a costume that makes it appear as if she's topless. #next_pages_container { width: 5px; hight: 5px; position: absolute; top: -100px; left: -100px; z-index: 2147483647 !important; }

Some heated bickering between friends.

Jackie must learn to be true to herself, even when music promoters try to force her to change her image to meet their idea of what a pop star should be.

Some car brands are mentioned, including Volkswagen and Jaguar.

Several scenes take place in a family-owned pub, where people drink beer and other alcoholic beverages. Some characters smoke cigarettes, including a mature-for-his-age 14-year-old boy.