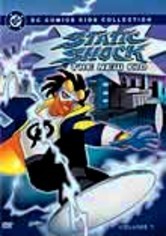 2003 NR 1 discs
This special release offers six episodes from the exciting series that was so celebrated it was nominated for both an Emmy and a Humanitas Award. Inspired by comic book characters created by artist Dwayne McDuffie, "Static Shock" explores how unassuming teenager Virgil Hawkins became a hero. Extras include an interactive map of Dakota, a "Static's Gadgets" featurette, "Front Page" biographies, "Static Shock: Bad Guy Beatdown" and more.

Parents need to know that this cartoon series centers on a superhero who can control and project electricity as a weapon, so there's plenty of animated action violence (explosions, electric shock, etc.) with few consequences. That said, as superhero stories go, this one boasts encouraging diversity and surprising depth of character in Virgil, an African-American teen-turned-hero who follows his heart -- rather than the pressure of his gang of buddies -- to use his newfound powers for good.

Cartoon violence includes explosions, long falls, electric shocks, and physical exchanges (punching, kicking, and use of everyday objects as weapons), none of which has realistic consequences.

Violence is the most common means of conflict resolution, though Virgil relies on his inventive best friend to help him craft his plans against the supervillains. He's also good at standing strong against peer pressure. As an African-American superhero, Virgil serves as a role model to kids who aren't typically represented in superhero cartoons.