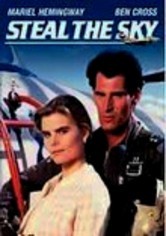 1988 NR 1h 45m DVD
Secrets and betrayal take center stage in this made-for-television drama chronicling the true story of an American spy (Mariel Hemingway) who tries to convince an Iraqi pilot (Ben Cross) to steal a Soviet jet. Using seduction as her primary weapon, U.S. agent Helen Mason unintentionally falls in love with her subject -- who happens to be married -- and must ultimately decide whether she'll help protect his family.