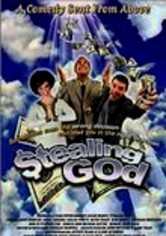 2005 NR 1h 33m DVD
After their cable has been cut off and they're forced to watch nothing but Christian programming, roommates and down-on-their-luck actors Morris Jeffries and Bryan Anderson (Mark Ferrera and Jerry Eisinger) hit upon the idea to launch a phony Christian TV show. Soon, the lads' "The Profits Prayer Network" is netting them millions, but an ethical dilemma looms.