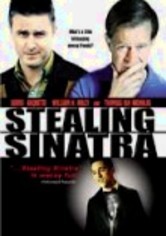 2003 R 1h 35m DVD
Based on the real-life kidnapping of legendary singer Frank Sinatra's son in 1963, but infused with a massive dose of humor and imagination, this dramatic comedy by director Ron Underwood attempts to root out the mindset of the three perpetrators (played to great effect by William H. Macy, David Arquette and Thomas Ian Nicholas). Considering they're no experts, the plan is understandably doomed before it's even set into hilarious motion.