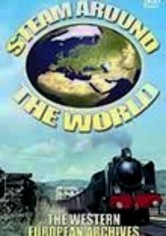 2006 NR 1h 5m DVD
Employing rare 16mm footage captured by American railroad buff Harry P. Dodge, this documentary takes viewers across Eastern Europe to look at the steam locomotives of the 1960s and '70s. As passenger and freight trains leave behind a plume of smoke as they travel through countries like Yugoslavia, Hungary and Poland, the film provides a close look at some of the world's great steam locomotives traversing landscapes and urban centers.