Steam Around the World: The Latin American Archives 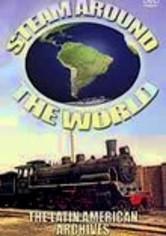 Steam Around the World: The Latin American Archives

2006 NR 1h 8m DVD
American railroad enthusiast Harry P. Dodge turns his camera to the great railways of Latin America. Train aficionados should hop aboard to marvel at Dodge's lovingly captured 16 mm footage of Brazil's Leopoldina Railway, the Serra Inclines, the British locomotives of Argentina and the Antofagasta and Bolivia Railway. Other stops include Southern and Central Peru, as well as the railway wonders of El Salvador and Mexico.