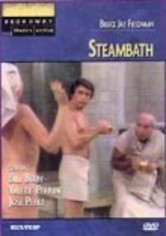 1973 NR 1h 30m DVD
Bill Bixby stars in this small-screen adaptation of Bruce Jay Friedman's off-Broadway play by the same name, the story of a group of dearly departed souls who sweat it out in a steam bath afterlife under the thumb of a towel boy God (José Pérez). The play was considered controversial when it first premiered in the 1970s, mainly because of obscene language that was largely trimmed for the televised version.