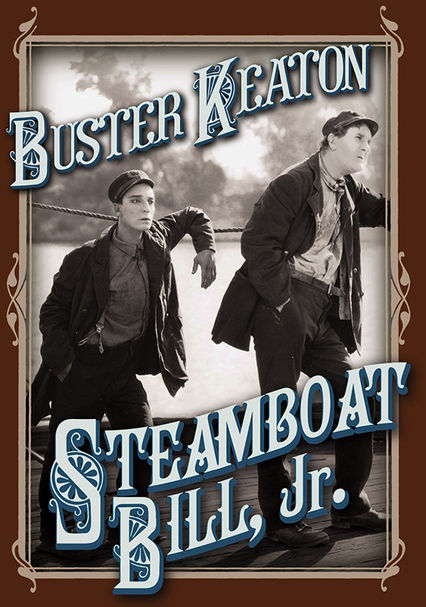 1928 NR 1h 51m DVD
A young dandy gets caught in the midst of a feud between his father, Steamboat Bill Sr., and rival riverboat proprietor J.J. King. As Bill Sr. goes about toughening up his foppish son, Junior is busy falling for King's daughter.

Parents need to know that Steamboat Bill Jr. is the tenth of Buster Keaton's twelve great comedy features from the silent era. It features one of his most fantastic set pieces: a destructive cyclone that blows down several buildings and blasts pedestrians and cars across the street. (In one famous shot, a building falls on top of him, and his body passes harmlessly through an open window.) There's a good deal of threatening, shoving, punching, and brawling in this movie, mostly from the character of Buster's father. The main character falls in love with a girl, though nothing physical (kissing, etc.) is shown. The father character smokes a pipe and chews tobacco. The heroes sometimes engage in illegal or illicit activities, but all is made right by their heroic acts during the final stretch. Old feuds end and arguments are patched up. This is mostly OK for kids, as long as they don't try these spectacular stunts at home!

The main character falls in love with a girl and prepares to run away with her. There's no kissing or physical contact. We see some of her frilly underthings during a daring water rescue in the final act. We see a poster for a movie called "The Boob," which refers to an idiot rather than a body part.

Characters shove and threaten each other, punches are thrown, and there's occasional brawling. Characters throw rocks at one another (but miss). A huge cyclone strikes and wreaks havoc in the town, destroying buildings and sending people running for their lives.

The movie's main theme is that nobody has the power to change the behavior of others, no matter how abhorrent. But if the right situation comes along, their behavior might turn out to be admirable, brave, and helpful, all by itself. On the negative side, there is a brief joke involving an African-American man.

The steamboat captain smokes a pipe and chews tobacco. He gives Buster some chewing tobacco and he accidentally swallows it. There's a partly covered ad for cigarettes (no brand name) on a building.