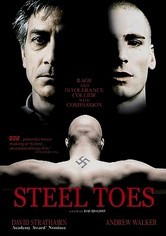 2006 R 1h 30m DVD
This intense crime drama stars Oscar nominee David Strathairn as liberal Jewish attorney Danny Dunckelman, who's appointed by the court to defend Mike Downey (Andrew W. Walker), a neo-Nazi skinhead on trial for the murder of an East Indian man. Confronting religious and racial intolerance, Mike and Danny struggle to form an alliance despite their divergent beliefs and sensibilities in this provocative exploration of hatred and forgiveness.