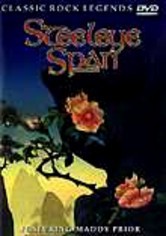 1978 NR 1h 0m DVD
Led by Maddy Prior's powerhouse voice, the seminal British folk band Steeleye Span was a driving force in the U.K. music scene during the 1970s. Drawing on both contemporary and traditional influences, the band's music had a lasting effect on a generation of loyal fans. This video captures the band live at its best during a 1989 performance that includes the hits "Black Jack Davy," "Following Me," "Padstow" and "All Around My Hat."