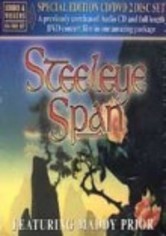 2002 NR 1h 0m DVD
British electric folk veterans Steeleye Span perform a lively set of eight tunes in this 1989 concert from their "Tempted and Tried" tour. Captured during the band's 20th anniversary, the show features vocals by founding member Maddy Prior. The set list includes "Following Me," "Thomas the Rhymer," "Black Jack Davy," "Padstow," "All Around My Hat," "Shaking of the Sheets" and "Jack Hall Gaudette."