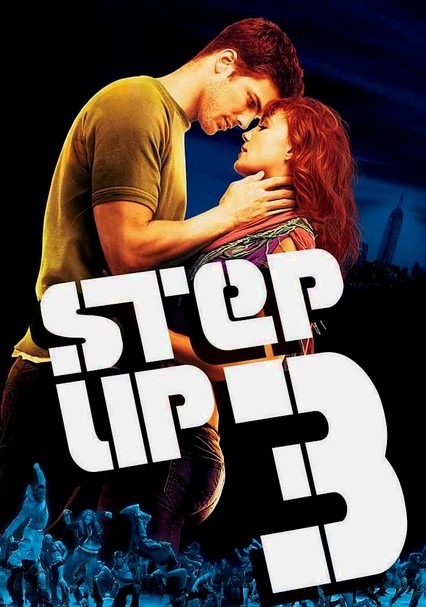 2010 PG-13 1h 47m Blu-ray / DVD
This third installment in the Step Up saga centers on a motley crew of street dancers who take on a talented squad of hip-hoppers with the help of a New York University freshman named Moose.

Parents need to know that the third installment in the Step Up franchise has some romance and some aggressive dance battles, but is overall an age-appropriate choice for younger teens. There's flirting, kissing, and at-times sexy dancing, but there's nothing truly risque, and the romance is tame by movie standards. One scene shows a violent club brawl, and all of the dance battles are aggressive and feature hostile dancers challenging each other. (And the 3-D makes the dance sequences all the more thrilling/intense.) Although the ultimate message is a positive one -- to follow your passion wherever it leads -- some of the characters make it seem like dancing is more important than attending college or pretty much any other responsibility.

A couple flirts for half of the movie, does a few sultry dance moves together (including an intimate tango), and kisses passionately a couple of times. Another couple kisses briefly in one scene. Several young women are dressed in tight or skin-baring clothes, and some of the choreography could be considered provocative.

The dance "battles" are aggressive but not necessarily violent, although they do lead to actual brawls between the dance crews one or two times. There's also some pushing and shoving between the crew leaders, but no blood or injuries.

Although ultimately the message is positive -- that people should follow their passion, whether it's dance, filmmaking, or engineering -- there are some mixed signals when Luke encourages Moose to blow off classes for the dance battles. The fact that Natalie lies about who she is for much of the movie is also a negative take-away for kids.

In addition to the various Nike sneakers the dancers wear, brands are featured during the dance competitions, particularly Sprite. The friends play videogames on a PlayStation, which is also one of the sponsors of the competition.

At a fancy party and in a dance club, there are people with cups in their hands, but it's not overt, and it's implied to be alcohol, rather than specifically confirmed.