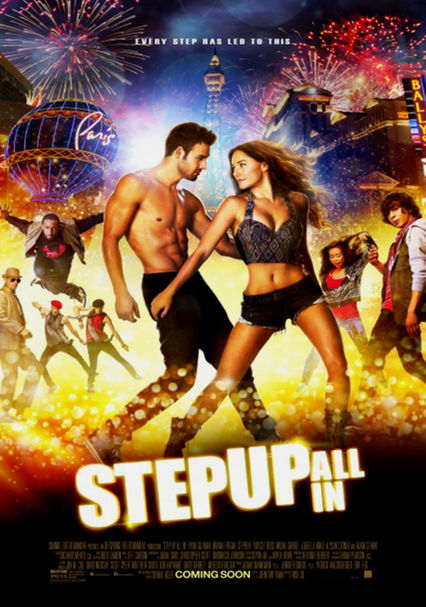 2014 PG-13 1h 52m DVD
Continuing the Step Up street dance series, competitors gather in Las Vegas for the ultimate dance-off, including champions from the previous films. In addition to the dance action, romance and rivalries abound among the determined contestants.

Parents need to know that Step Up: All In -- the fifth installment in the popular dance-flick franchise -- stars several leads from the previous movies (think of it as Step Up: All Stars). Like the other Step Up movies, there's a little bit of romance and a whole lot of over-the-top dance sequences. Most audiences by now understand that these movies aren't known for their performances or plot lines but for the dancing; this one has the added bonus of featuring some fan favorites from the past few films. This franchise targets tweens and teens, particularly those interested in hip-hop and dance crews. Expect some swearing (one "f--king," plus "s--t," "d--k," etc.), social drinking by young adults (once to the point of tipsiness), kissing/sexual tension, pushing/shoving, and a healthy dose of product placement.

Sexual tension between two of the dancers, who finally share a big kiss at the end of the movie. Another set of dancers are an established couple who live together and kiss a few times. A few other couples kiss as well.

Some pushing and shoving, a bar room brawl, and several harmless dance battles.

The life of a dancer is difficult but rewarding, and friends should watch out for one another, not let differences grow into resentment.

VH1 is heavily featured as the cable network that's sponsoring the competition. Other brands featured include Adidas, Nike, Range Rover, Google, and many Las Vegas hotels.

The dancers, who all look to be in their early to mid 20s, drink socially and -- in one case -- get a bit tipsy.