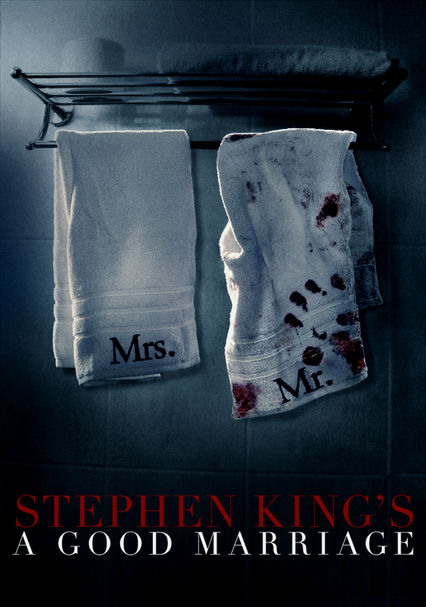 2014 R 1h 42m DVD
With a serial killer on the loose and a disheveled stranger stalking her, devoted wife Darcy Anderson has further cause for alarm after she unwittingly uncovers an ominous secret about her husband that threatens their happy marriage -- and her life.

Parents need to know that Stephen King's A Good Marriage is a creepy horror thriller based on the prolific author's novella, which he adapted himself into the film's screenplay. Since the movie follows a 50-something married couple instead of young adults, it's unlikely to appeal to teens unless they're already big King fans. There are some mature themes and a few violent scenes -- including close-ups of crime photographs showing murdered women, moments of a man following women he's going to kill (the actual murders take place off camera), and one murder that's staged like an accident. The language is occasionally salty ("f--k," "s--t"), but it's the violence, emotional/marital abuse, and sex that make this too mature for younger audiences.

A passionate kiss, some over-the-clothes groping, and a lengthy scene of marital sex early in the film. No frontal nudity, but the woman's bare back is shown, and there are realistic sex noises.

News clips about a serial killer's murders; close-ups of crime photos, all of dead women; and a televised horror movie that scares a character a couple of times. Beadie is shown tracking and following women he's going to murder, but the deaths aren't shown. Another murder is detailed from start to finish, but no weapons are used (a person is pushed off the stairs and then smothered when they survive the fall). Emotional/marital abuse.

The movie drives home the fact that you can't ever know everything about another person, even someone you've lived with for 25 years.