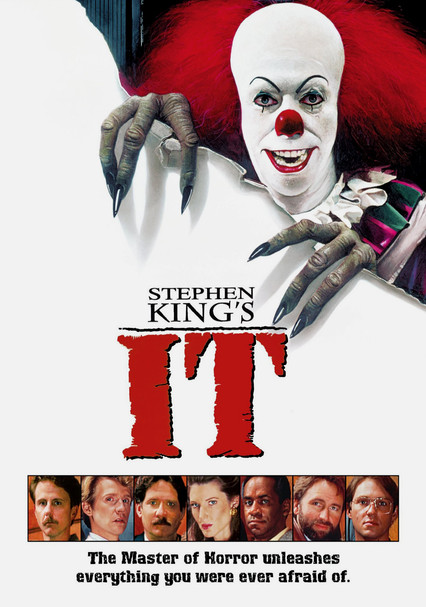 1990 NR 3h 7m DVD
In the 1960s, a demonic creature dressed in a clown suit (Tim Curry) terrorizes seven youngsters in Derry, Maine. The evil clown has been killing the town's children, but the seven kids fight back in an effort to defeat it. Thirty years later, however, when the seven pals learn of another string of child murders, they must battle "It" once again. Stephen King's novel serves as the basis for this Emmy-winning TV miniseries co-starring John Ritter.

Parents need to know that the plot of this made-for-TV Stephen King adaptation centers on a long series of unsolved child murders, and while the worst of the nasty stuff is kept offscreen, there are still apparitions of semi-decayed juvenile ghosts, a werewolf, a fanged clown, and other monsters. Blood is shown frequently, gurgling out of drains and splashed around the community, but it's "supernatural" blood, only visible to the terrorized heroes and not other people.

Several characters start romantic liaisons but never finish them. Rather out of the blue, a grown man admits (regretfully) to being a virgin.

Much blood -- erupting through sewers and out of exploded balloons. But it's "supernatural" blood, in that most people can't see it -- only the terrorized heroes. Kids bully, beat, and threaten each other with knives. A man is found dead in a tub (a suicide who slashed his wrists). A wife is slapped by her abusive husband. One character is stabbed. Rocks thrown at people and monsters.

Prime-time profanities like "bastard," "son of a bitch" and the "n" word.

On the one hand, there's a killer clown. On the other the protagonists are decent-hearted kids that support one another in youth and adulthood against bullies, bad parents, and worse. Only the lone female in the bunch seems to have taken her childhood traumas visibly into adulthood, marrying an abusive man.

Social drinking, or drinking to calm nerves after a demonic attack. One girl's father is an abusive drunk.